November 11, 2014 – If the first thing that came to mind when you saw this post is about Budapest is the song by George Ezra, then you’re not alone. We may have even listened to it several times while in the city. Turns out, it’s not really about Budapest, but everything you’re about to read is, so consider us even!

WARNING: This post is a bit long because anything shorter wouldn’t be doing it justice.

We flew from Dublin to Budapest late on Sunday night – I’m talking 1AM arrival…not fun. Our AirBNB host was amazing and met us in the early hours of the morning at the apartment we rented.

[Hint: Make sure you notify your AirBNB host of your travel timing when you request the place, there’s nothing worse than having a place & then realizing it won’t work because of schedules! It’s also just common courtesy – they are letting you crash at their place, after all]

After sleeping off our late night, we woke up with one thing on our minds: THERMAL BATHS

Traveling has a way of making you tense, even if you’re having the best time, you can’t avoid kinks in your neck from falling asleep on trains/planes/buses or the strain on your muscles from dragging your luggage around. Needless to say, a day at the baths sounded absolutely perfect.

We researched a bit and found that the best baths were just outside the city center, called the Szchenyi baths. We tried to call ahead and make sure they would have room for a couple of massages, but were met with the language barrier and decided instead to just wing it.

And oh my, was it perfect! 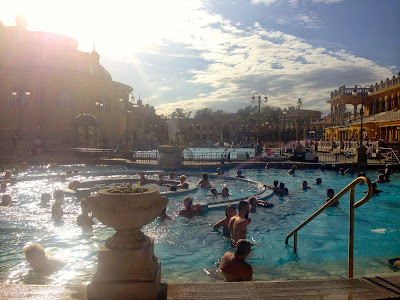 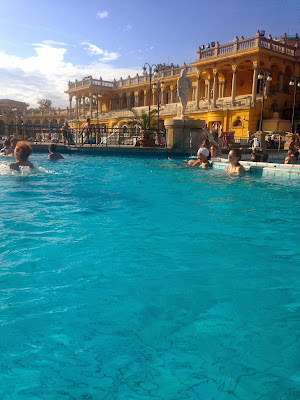 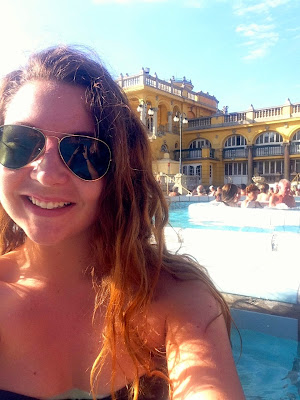 My roommate, Cassie, and I splurged on massages before hopping into the warm, outdoor pools. It was so refreshing and relaxing. We spent quite a few hours just wading in and out of pools, taking spins around a whirlpool that was surprisingly strong, snapping pictures with our phones (thank you, LifeProof case) and making new friends. 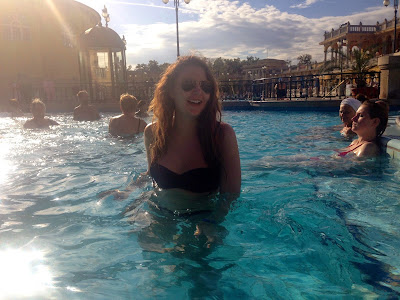 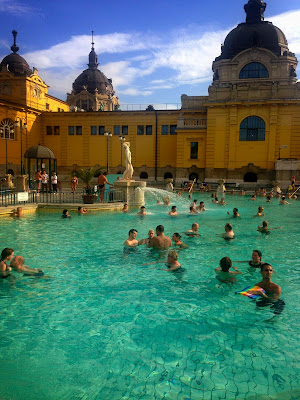 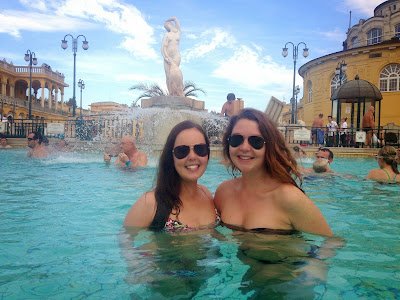 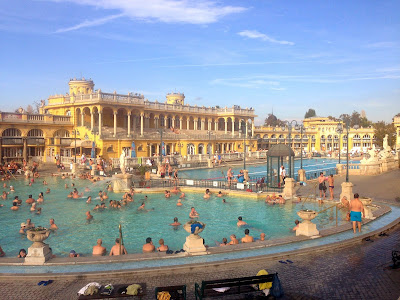 When we had finally water logged ourselves – and our towels – enough, we packed up and went back to the apartment to shower & nap. Hot tubbing is tough work, okay?

By the time we all recovered from our intense state of relaxation, it was time for dinner. Usually our resident foodie, Cass, finds the restaurants we go to, but this time Emily (the other one) found a suggestion for Café Kör, and thank goodness because this might have been the best part of the trip! Except that we were so wrapped up in the moment that we forgot to take any pictures…

So let me set the scene: We arrive in downtown Budapest, in front of the Basilica, where everything is lit up in that backyard-party kind of way. Around the corner, on a side street, this little restaurant is tucked away, with a small outdoor seating area and an awning boasting its name. When we told the maître’d that we didn’t have a reservation, he looked around frantically at the full tables and then, settling down a bit, told us that if we waited fifteen minutes, he’d seat us. At this point, we’re used to waiting, and have spent quite some time in queues for restaurants. We happily passed the time scouring the menu and commenting on dishes. Then, lo and behold, our maître’d strutted up to us with a tray of four glasses of champagne! He announced that it had been more than fifteen minutes and he wanted to make up for breaking his promise. Totally unexpected, totally pleasant, and totally a reason why this place is the best.

Inside, the restaurant was cute, cozy and very lively. We immediately ordered a few appetizers: a half portion of the goulash (Hungarian comfort food) and a plate of the café’s specialties (salmon carpaccio, foie gras, dumplings, cheeses and vegetables). Then, after much debate, we settle on our main dishes and a nice white wine.
The food absolutely blew us away. It was a delicious mixture between homemade and five-star material, and our empty stomachs happily took it all in! The meal lingered on over another bottle of wine, and then a complimentary tasting of Hungarian sour cherry liquor – definitely a must-try, but maybe not more than once!
How can this get any better? The entire meal cost each of us about 15 euro. This is absolutely unheard of. At the moment, I am sadly looking at a cup of coffee that cost half of that…

So, if you need to ask, I wholeheartedly recommend stopping by this magical establishment if you’re ever in Budapest.

After our feast, we went straight to the ruins bars to check out this grungy locale that we’d been told about numerous times: Szimplakert. It’s basically a giant bar in a partially crumbled stone building re-done by a street artist. Bike wheels, posters, chairs, broken paraphernalia and graffiti adorned the walls, with dim string lights and tall tables dotting the various sections. There was a main, indoor area, several side rooms, an upstairs balcony with couches, and an outside garden terrace. It’s impossible to see all of this place. We found an empty table in the garden area and got an orange-flavored hookah pipe to share. Everyone around us was drinking, laughing, and smoking so we indulged in all three. 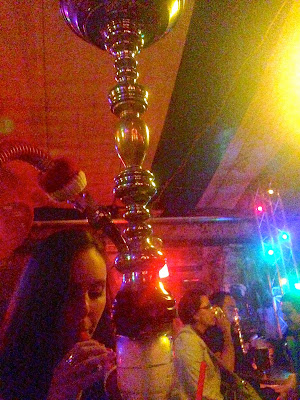 The next day we dedicated to sight-seeing. Our first stop was the House of Terror, which was an in-depth museum on the Nazi/Soviet ruling of Budapest during and after World War II. It was quite intense, and even though I had to speed past the last part because I didn’t have the heart for it, I would definitely recommend going. The curation of the museum might be the best I have ever encountered, and it was so interesting to learn about that part of history from a different point of view than I am used to. Side note: why don’t we learn more about Eastern Europe in school? Such a shame!

Next up was St. Stephen’s Basilica to lighten our moods a bit. The architecture in the cathedral was breath-taking, everything was dipped in gold. But the best treat was the view from the top – even though we huffed & puffed our way to the top by way of stairs (thanks, Isabella). The city was sprawling and gorgeous, especially in the light of dusk. 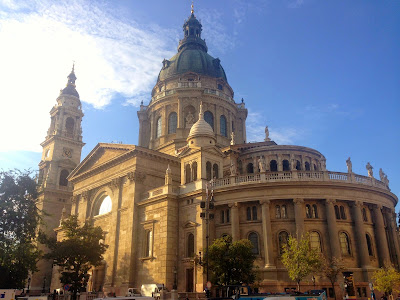 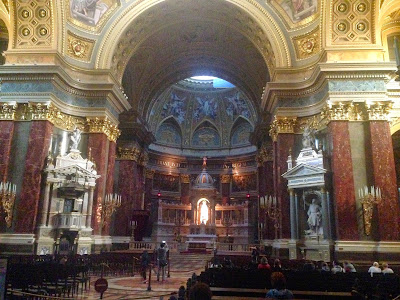 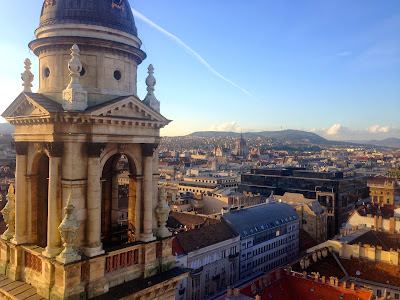 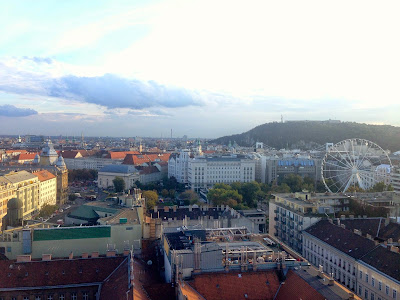 Then we wandered along the Danube river and stumbled upon the sculpture of shoes dedicated to those who lost their lives from the minutemen attack at the start of Nazi rule. It was an incredibly sombering day, but entirely necessary. 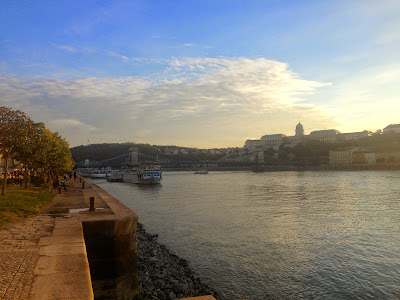 We ate at another fancy restaurant (yet again only paying about a quarter of what it would cost in France..) and went back to Szimplekert – I told you, there is so much to explore there! – before coming home and packing for our train the next day. 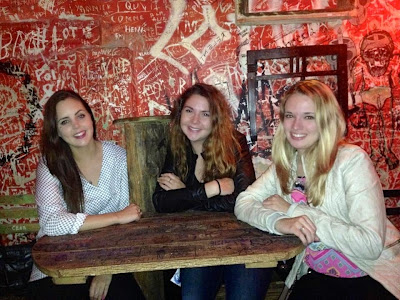 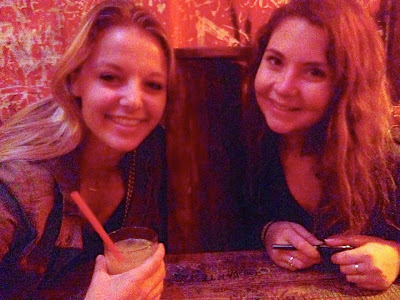 Overall, Budapest turned out to be much more deep than I expected. It gave me the most to think about, as the whole city was drenched in history. But it was also friendly and the most hospitable place I’ve encountered thus far.

Tips for Traveling to Budapest:
XO,
Em
Share on my love letter to nairobi